Moresport CFO, Cobus Loubser, says that his company likes to standardise its equipment wherever possible to enhance efficiencies. “To this end, Goscor was a sensible choice when deciding on a preferred materials handling supplier. Their pricing is competitive, they have a quality product with a proven track record and a long-term ability to support and maintain their machines,” Loubser says.

The SC500 three-wheel electric forklift is a multipurpose workhorse with the power, manoeuvrability, and industry-leading dependability to do whatever is required, day after day, year after year. “Their durability and performance are second to none and, in VNA applications, the quad mast, which is unique to Crown, is a major advantage,” says Farren. “If your application calls for low collapsed height and high load placement, the Crown quad mast is the answer, which provides an extra 1270mm lift-height versus a triple-stage mast with the same collapsed height.”

Loubser says that these machines were chosen specifically for VNA applications and their performance has been as expected. “Both the machines and the service of Goscor’s Western Cape branch have been up to Goscor’s normal high standard, “he concluded.

MoreSport, based in Cape Town, is South Africa’s leading retail and distribution organisation of sports related footwear, apparel, and equipment.

Since 1984 Goscor Lift Truck Company (GLTC), part of Imperial’s Goscor Group, has, offered world class equipment and solutions in the warehouse materials handling industry. GLTC is the sole distributor in South Africa of some of the most world’s most famous brands including: Crown, Doosan, Bendi and Hubtex. GLTC is part of the Goscor Group – now part of Imperial- which has been supplying the local market with state-of-the-art industrial equipment and world-class solutions for the past 29years. It consists of 9 key divisions, and is an exclusive distributor of leading and world-class brands of industrial equipment. 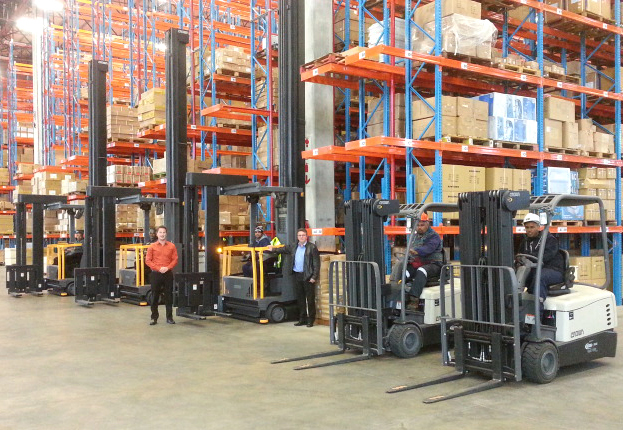