Doosan has announced that it will once again be an Official Patron of The Open Championship, the world’s oldest major golf tournament. 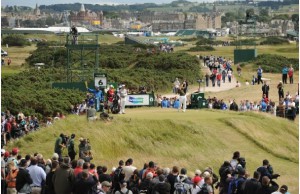 The sponsorship forms an important part of Doosan’s marketing strategy aimed at enhancing the company’s business relationships whilst building new opportunities and increasing the brand image.

The Open is organised by The R&A, golf’s governing body, and is celebrating over 150 years of the tournament. Doosan will be one of five patrons, alongside Rolex and HSBC, and is the first company headquartered in Korea to support The Open.

The Open will be seen by 180,000 golf fans at the event and the Championship will be broadcast to 190 nations including Europe and North America.

Mr. Chinwon Park (Vice President of Doosan Infracore Forklifts) said, “We’re very proud to be once again sponsoring The Open Championship and we are honoured to be able to attach the Doosan name to such a prestigious and world famous event.”

Michael Tate, Director of The R&A, said, “We are delighted to have Doosan as our Patron again this year. We continue to see our international audiences increasing and I believe Doosan’s support portrays it as a truly global company”.

“In addition to being a Patron, Doosan kindly donated to us an excavator which is being put to great use in installing the fibre optic cables that take The Open Championship’s images to 190 countries around the world.”

At last year’s championship, Doosan held a ceremony and donated DX55W, one of Doosan Infracore’s flagship wheel excavators widely used at construction sites. Currently, the donated model is used to maintain all of the Open championship’s courses including the facilities for Royal St. George’s golf course, this year’s venue.

Doosan is a worldwide group of companies and Doosan’s strength has come from its vast array of products and services ranging from industries. With $23 billion in sales revenue in 2010, Doosan specializes in infrastructure support business (ISB) including nuclear and thermal power-plants, construction, marine diesel engines, mechanical equipment and material handling equipments.