Leading producer and marketer of globally recognised alcoholic beverages, Distell, like many large distribution companies do at some time or another, was experiencing a serious warehousing space squeeze. To solve the problem there initially seemed to be two choices: to expand the footprint of the warehouse or raise the roof – both undesirable because of the high costs and significant disruption.

Then along came Goscor Lift Truck’s Western Cape regional sales manager, Grant Laight, who proposed a solution: get some Bendi dual purpose, articulated, narrow aisle, forklifts and double the warehouse capacity by halving the aisle widths from 4m to 2m. 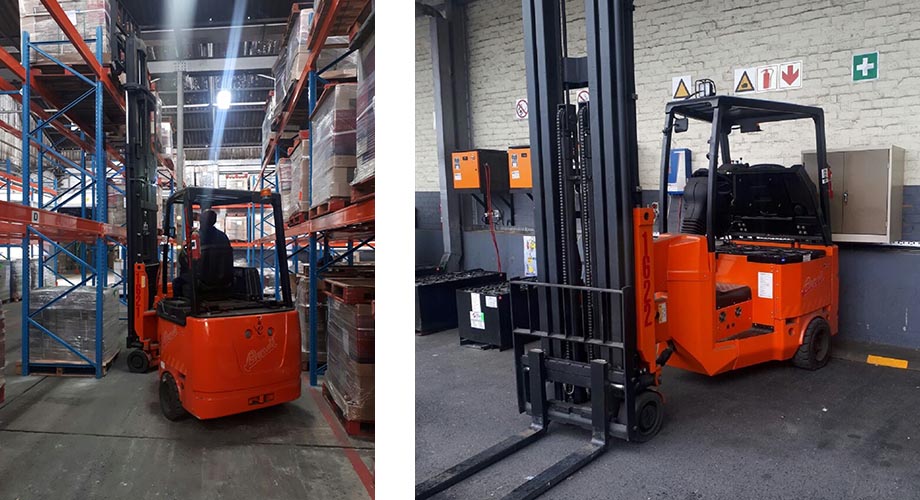 “It seemed too good to be true at first,” says Distell’s procurement planning and logistics manager Janke Nussey. “We needed reassurance that the Bendis could work in very narrow aisles and less than ideal surface areas and we also wanted to ensure that they were reliable and productive machines. Although Goscor’s reputation as a reliable supplier preceded them, we had to experience this for ourselves. It didn’t take long for us to be reassured on all counts.”

She adds that not only have the Bendis enabled Distell’s Adam Tas Dry Goods facility to double its warehouse space very economically, but the machines have also performed as expected and the service from Grant Laight and the entire Goscor team has been great. “Also, the promise that the Bendi machines would work equally well inside and outside has been fulfilled. This, in itself, adds to the overall cost-saving as we were able to optimise our existing forklift fleet and reduce double handling,” Nussey says.

The ability of the Bendis to work both inside in very narrow aisles (VNA) and outside is indeed a major advantage. The typical reach truck requires aisles of at least 2.5m to 4m for storage and racking, and typically have small, harder wheels and low ground clearance, making outdoor use impractical. But the Bendi, because of its unique counterbalanced design with large soft tyres and its ability to articulate, is able to operate outside like a common forklift truck and work inside in aisles that are much narrower and space saving.

“The fact is that even in widths of just 1.8m, the Bendi forklift helps the operator to work faster, safer and more accurately and, in addition, we have seen over the years that racking damage is significantly less,” Laight says.

Distell acquired three Bendi B420s and the fourth one will be delivered shortly. “We modified the masts to fit into the Adam Tas building and used rear-wheel drive machines so they could work efficiently on the rough paved section outside and easily cope with the ramps into the building,” says Laight.

He adds that two batteries were supplied with each Bendi and Goscor installed a full battery bay to guarantee the most productive operation.

Goscor Lift Truck   MD, Darryl Shafto says he is delighted to have Distell as a client. “Distell is one of the best-known companies in our country and it’s a real privilege that we have been able to be of service to them. We look forward to a long and productive relationship,” he concluded.

About the Distell Group

Distell is a leading producer of wines, spirits, ciders and ready-to-drink (RTD) beverages, which are sold across the world. Its diverse portfolio of brands, with their rich heritage and authentic character, are priced across the price continuum to offer consumers a choice for every occasion.